Why did I visit Japan?

I expected to enjoy the food and the scenery; I anticipated seeing cutting-edge technology; I already knew from working with them that I liked Japanese people. The country seemed slightly exotic without being intimidating. A tour of Japan felt like a suitably ‘special’ holiday to mark my retirement, especially as we chose the cherry blossom tour which takes place around the time of our wedding anniversary.

Many Japanese celebrate cherry blossom season with a hanami party, which is a picnic under the cherry trees. On day two of the tour, our group was going to enjoy its very own hanami party! Unfortunately, the weather was poor, cold and wet, and we picnicked in the rain. Our tour guide had prepared copies of a traditional Japanese cherry blossom song for us to sing, and provided a recorded accompaniment. We sang it. It all felt a little silly.

Until the next day.

We took a boat trip on the Sumida River, and there, in the background, was the cherry blossom song, ‘Sakura, Sakura’, we had sung the day before. Suddenly, the symbolism of cherry blossom made perfect emotional sense. I don’t think I can explain it; it’s something you need to experience before you can even begin to understand it. It goes way beyond the obvious reading of the transience of beauty.

Then, a few days later, Mount Fuji. What is it about that peak that makes it so potent? I’m not Japanese; it’s not a national icon of mine; and yet seeing it evoked a sense of awe in me. And it wasn’t just my response. We were travelling by bus, and the whole busload of us  gasped (and I really mean that – you could hear the sharp intake of breath) as we first saw the mountain.

In the afternoon, I walked a short way along the ancient Tokkaido highway, which is planted on either side with 400-year-old cedars. There was one especially majestic tree. I stopped and rested my hand against its trunk. Abruptly I felt…disrespectful. I felt as though it would have been more appropriate to have bowed to the tree.

The next day we saw the Miyako Odori. I have rarely watched a performance of such intensity. I understand some of the theatrical devices that made it so powerful, but there’s more to it than that. Once again, it leads back to cherry blossom, the exquisite beauty of the world that humans are privileged to share for a short period.

This holiday has changed me. A small part of that change is that I feel more tranquil. I haven’t changed my religious belief; I’m certainly not a Shintoist, or an animist; but I’ve experienced emotional responses that go beyond my ability to understand or describe them more than superficially. I’m glad of those experiences; I’m the richer for them.

It was a good holiday. Thank you, Japan!

When we are ‘in the moment’, we do not worry about what happened in the past, nor dream about what we would like to happen in the future. Instead, we allow ourselves to cherish the experience as it happens. Being in the open air in a beautiful place can help. This poem describes sitting on Dartmoor in summer. Do you have a favourite place? 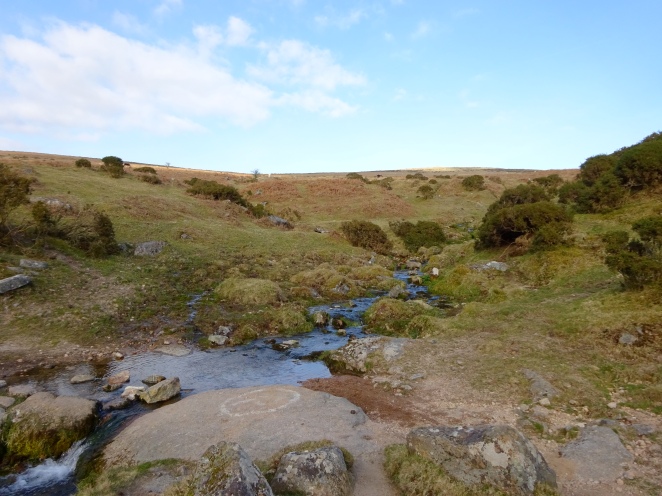 The sun is hot on my hair and bare arms.

The granite on which I sit is cool,

Hard, rough and smooth, round and edged.

The turf smells of tea, stewed in the pot.

They tear noisily at the grass,

While the song of the skylark is ever fainter and sweeter

As it climbs beyond hearing.

We carry all sorts of baggage through life, and often it distracts us from experiencing joy. Do we know what loads we are carrying? What do we need to carry? How can we relinquish the things we don’t need? I tell this story with thanks to my youngest daughter who, indirectly, inspired it. 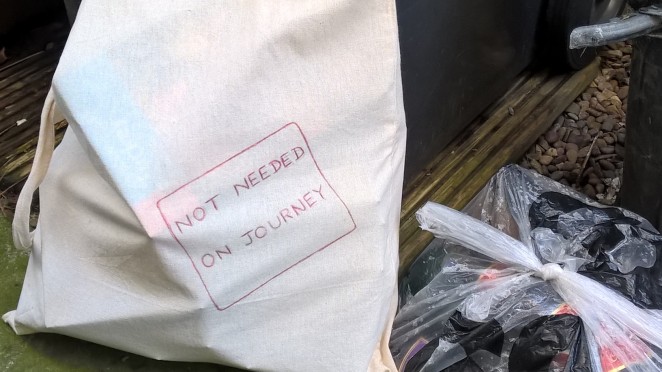 There were people everywhere.

The people were walking, some slowly, some briskly. Some striding forward purposefully; many meandering; some marching busily in one direction, then changing course to tramp equally energetically in another. Gradually though, no matter how winding their path, they made their way due west.

And all but the smallest and youngest carried a bag, a hessian bag, a gunny sack.

I approached one of them, a woman about forty years old. Her hair was streaked with grey, and her face was lined. Her bag seemed heavy.

“I hope you don’t mind my asking – it’s nosey, I admit – but would you mind telling me what you’re carrying in your bag?”

She sighed deeply, and glanced inside the bag as though to remind herself.

“It’s grief for my mother. She died twelve years ago.”

“You would travel more easily without your burden. Why don’t you let go of it? Here, leave it by the roadside and go on without it. Nobody will mind!”

Tears welled in her eyes.

“Then I would have nothing,” she wept. “My grief is all I still have of my mother.”

I didn’t know what to say, and so I left her and approached another, a young man. His face was steadfast and his movements purposeful. He had energy and, maybe, humour. His bag was large, and looked heavy, but he was strong and made light of it.

“I wonder – it’s inquisitive I know – but would you satisfy my curiosity about your bag? What is it that you prize so highly that you carry it everywhere, even though it is so heavy?”

He stood tall, shoulders held back, and looked me boldly in the eye.

“I carry the expectations of my family!”

“Why not lay down the burden? Travel light. You don’t need to carry it; you can choose!”

His face stiffened. “If I did that, I would be saying that my parents made the wrong choice when they toiled all the hours of the day to give me a good start in life. I’m not going to do that!” Then, sheepishly – he was a young man after all – he added, “Besides, it’s not so very heavy. I can manage it.”

I wished him good luck, and looked around.

There! Over there! A meadow, where a young couple are playing with two children! Their bags are empty, and the woman has flowers in her hair!

She smiles at me as I approach, a merry, mischievous smile.

“You want to know why my bag is empty, I think,” she says.

There is a scent of roses in the air. The noise of the crowd is hushed, and I can hear birdsong and gently falling water. The children, playing with their father, laugh joyously as he tumbles them aloft and a-low.

The girl laughs with them, then turns to me. Her expression is serious, but bears the memory of her laughter.

“It was hard at first,” she admits. “I would take something out of the bag – pride, say – intending to leave it behind, and I would look at it. Out there,” and she gestures at the vast plain with its toiling figures, “pride can sometimes look quite attractive. And then I would put it back into the sack again! But eventually I realised that what looked like a big lump of pride was actually made up of lots of little bits of pride. It was easier to let go a bit at a time. And the more I let go, the easier it was.”

“It sounds okay,” I say, “but what happens if you throw something away that you later find you need on the journey?”

“That probably won’t happen. There are so many resources we can draw on. But, even if the lack of something brings your journey to an end, wouldn’t you rather travel here than out there?” Once again I look at the monotonous expanse, the grey figures struggling with burdens they can scarcely carry.

The girl can sense my hesitation.

“You don’t need to make up your mind all at once,” she says quietly. “A little bit at a time is all it takes. Go now! You need to see more.”

She holds up her arms as though to shut me out, and I trip and fall.

People barged into me, cursing. A heavy sack landed on my right arm, bruising it painfully. The man carrying it swore vilely at me.

“What’s so important about your sack?” I demanded.

“It holds the will to rule,” he snarled. “Honeyed words, lies, delight in others’ pain, and the wish to wound. Now get out of my way!” He hauled the cumbersome bag onto his bull-like shoulder, his muscles writhing, his veins bulging, pulsing with turgid blood.

He barged past me. I watched him, this ox, this gorilla, this serpent, and I saw him stop. He held up his bag, and, with a great roar of frustrated rage and defiance, he tipped out the contents. Awestruck, I watched as they spilled out and broke into a million fragments, first chunks, then crumbs, then dust, until finally they were a mist that the lightest of breezes swept away. I looked back at the man. He had faded, was almost gone. And as he disappeared I realised that I could remember nothing about him.

As I gaze, and struggle to understand, I feel the lightest of touches on my arm. It is the young woman, only now she is no longer young. Laughter and love have left lines on her face, and her body sags where gravity’s pull has exaggerated the stretching of childbirth. She carries a small, empty bag.

The gentle air hints of roses in the twilight of evening. Birds sing merrily about a night that is just the prelude to a new dawn. With a laugh as merry as the birds, she shakes out her bag. There is nothing in it, but as she shakes the fabric it becomes silken. It glows white, crimson, emerald, azure. It grows and grows, stretching up and out as she holds it aloft at arm’s length, like a banner. The light grows brighter and brighter, until I can see only her face, her eyes and her smile; until there is only tranquillity and joy, great joy.

Thank you for visiting my blog!

If you enjoyed what you have read, please “Like” and “Share”. If you are new to the site, please feel free to browse earlier posts.

Because feedback is a powerful tool to help me improve, please comment. The button to do so (“Leave a comment”) is on the left under the Categories and above the Tags.