Here is Part 7 of my fantasy serial, “The Bridefarer’s Choice”.

If you are new to this story, you can find the earlier parts here

I will publish successive episodes every Monday. 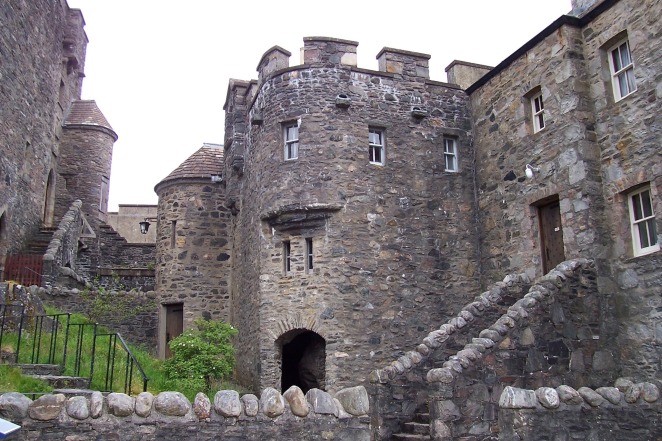 I very much hope you enjoy it!

Freya and I had barely reached the plain before we were apprehended by a troop of Lord Conor’s men. They bound my wrists behind my back, and made me ride all day without reins. My legs burned with the fatigue of controlling Mavra like that.

I hadn’t realised that Lord Conor would maintain a guard on such a little-used pass through the mountains. I glanced across at Freya. She rode serenely, ignoring our escort. At least they were treating her with courtesy.

“Here we are – the High Hall of Conor. Down you get!” I nearly fell as I dismounted.

The soldiers manhandled me beneath the portcullis, across the pebbled yard and through the strong stone entrance to the Hall. The mighty oak door thumped shut behind me, trapping me in a place of shadows.  Even in my exhaustion I realised that the building had been newly strengthened and fortified.

Onward they urged me, past flaring torches, until we stood in the Great Hall, in the presence of Lord Conor.

“Here’s the man, my Lord, and this is the shield he was carrying,” grunted one of my captors.

“As was the blade he was carrying, my Lord.”

I dropped my eyes before Lord Conor’s stare.

“Bearing arms in my territory without my approval is forbidden. Bearing arms carrying a foreign device compounds your crime. The penalty is death. Do you have anything to say?”

I raised my eyes to his.

“My Lord, I crave pardon for a crime committed unwittingly. May I say too, that both shield and sword were packed on my beast, with the device concealed? I have no wish to offend, my Lord; I am a liegeman of Lord Robert, your ally.”

“Is he telling truth, Roderick?”

“Aye, my Lord. The shield was packed as he said.”

“How did you come by the shield?”

“My Lord, I was journeying from Fasthaven through the mountains with my bride. The folk of Fasthaven provided me with the weapons lest we meet with Danes on the road.”

“Yes, my Lord.” I hesitated. How much to tell? Lord Conor’s expression became grim. “My Lord. We met two Danes, warriors. I killed them.”

Lord Conor’s eyes opened very wide. He climbed down from his high seat and walked around me, looking intently at me. The top of his head just reached my shoulder.

“You’re no warrior, lad. You killed two Danes? I think not.”

The men around us sniggered.

“Do you think you could best me, lad?”

“My Lord, you are the ally of my liege lord. I would not raise blade against you.”

“Cut his bonds. Set him free.”

“Give him the blade and the shield.”

Roderick fetched both. I fumbled them with my numb hands. The soldiers loosened their blades.

“No!” Lord Conor’s voice was harsh and full of authority. “If he bests me in fair fight, release him and let him go where he will with his bride.”

I looked him in the face. He had a faint smile.

“My Lord. I will not lift blade against you.”

“Then you will die.”

He raised his sword high.

The blade was long and dark in the shadows. The steel looked very sharp. I looked at his eyes and read death there. I forced myself to keep looking. I saw him tense, saw the minute flicker of the muscles that presages a blow. That would have been the instant to raise my shield to parry. Instead, I remained perfectly still.

The heavy blade sang as it passed my ear, ripped the elbow of my jerkin, nicked the skin of my ankle.

“Ha! You’re no Dane. You’re loyal. Stupid, but loyal. Roderick – we’ll take care of him and set him on his way.”

I was shaking, but pulled myself to my full height.

“Thank you for your gentle courtesy, my Lord. Insofar as I may under my own liege lord, I pledge my sword and my life to your service.”

The warriors around me smirked, but Lord Conor looked grave.

“Insofar as I may without breaching my alliance with the Lord Robert, I accept your sword and your life. You are a brave man, Diarmid MacDiarmid, and I have need of such.”

I started. How did Lord Conor know my name?

“Lord Robert, that matter we were discussing earlier; I think we have the man for the job?”

A tall, pale-faced man, whose demeanour would have fitted more a scholar or a monk, emerged from the shadows. I had only seen him once before, but I recognised him immediately. I bowed my head, sank to one knee and proffered the hilts of my sword.

He accepted the weapon.

I stood, and he smiled at me, without warmth or humour.

“You will need this honour if you are to accomplish what we need.”

“Come,” said Lord Conor. “We will eat and plan. Thane Diarmid, you will join us at table.”