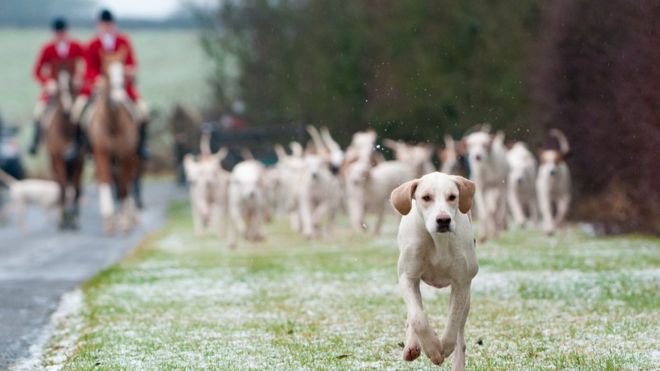 The Queen’s Arms was quiet mid-week, and the landlord was only too glad to make his lounge available to the Bentham Hunt. Without their custom it would scarcely have been worth opening at all on a Wednesday.

Jack Greenwood, the MFH, was cheerful and inebriated.

“So that’s it then. Theresa May has confirmed there will be a free vote to repeal the Hunting Act 2004. Her substantial victory on June 8th …” Hoarse cheering and a banging of glasses on the table interrupted him.

“As I was saying, before I was so rudely interrupted, her majority in Parliament means that the Act should be gone within months and we can resume our activities. I propose that we hold our first meet in three weeks time.”

“Hang on a mo, Jack. The Act’s not going to be repealed that quickly.” Arthur Clownes looked worried; but then, he always looked worried, thought Jack.

“No, but the CPS would rule that a prosecution wouldn’t be in the public interest. Besides, what Chief Constable would be brave enough to start criminal proceedings knowing that Parliament were to consider the matter?”

“Sounds good to me.” Brian Hall spoke up. He was a small man, with a fierce expression. You didn’t mess with Brian.

Arthur sat back in his seat with resignation. He supposed Jack would be proved right; he always was. Arthur preferred to be on the right side of the law.

Next morning, at breakfast, Brian had a hangover and was more than usually surly. As Fiona, his daughter, cleared his plate, he grunted, “The Hunt’s riding out in three weeks time. Get my jacket cleaned, will you? And make sure you’ll be presentable too.” He handed her a ten pound note.

“Don’t be so wet. Of course you’re coming. Our family’s always ridden to hounds, and we always will.”

“I’ve got something else arranged.”

“Then bloody unarrange it!” He slammed the door behind him.

Fiona quietly continued the housework. When she was confident her father wasn’t coming back, she pulled out her mobile and dialled.

“Dad’s told me the Hunt is starting up again.”

“Three weeks time. On the Saturday.”

As soon as she’d rung off, Fiona collected her father’s jacket from his wardrobe. It was muddy and stained. She would have had it cleaned earlier, only he wouldn’t give her the money. As it was, she’d have to raid the housekeeping; ten pounds wasn’t going to cover the dry-cleaning, not with the bus fare into town as well.

George hesitated before calling Edwin. He found him aggressive and frightening. Still, he was an effective organiser of protests, and he needed to know about the planned hunt.

“The Bentham Hunt are meeting in three weeks,” he told Edwin.

“I know. Hardly a surprise. You going to be there?”

“Yeah, as long as you’re not planning any violence.”

“Moi, violence? How could you even think it! No, it’ll just be placards. We’ll try and get pictures and video, of course. That sometimes leads to a… heated exchange of views.” He laughed.

George winced at the enthusiasm with which Edwin appeared to welcome the prospect.

The day of the hunt dawned fresh and clear. Brian was cheerful. He hummed as he buttoned up his jacket, in front of the mirror. “Not bad,” he thought, “not bad at all.” Perhaps he’d stand a chance with that newcomer to the village, the woman with the blonde hair and the big tits.

Fiona dressed with resignation. Her father had made it clear that she was expected to ride. She didn’t imagine for one moment that she’d succeed if she pleaded a headache. Still, her spirits lifted as she climbed into the saddle; it was a beautiful day. She’d enjoy the ride, and stay as far back from the kill as possible.

“Woah! Behave yourself, Prince!” The stallion was large and strong, but that didn’t worry Fiona; she’d been on horseback since before she could walk. Prince stopped tugging at the bit. Only his twitching ears as they left the yard betrayed his excitement.

The sunny day had also lifted the spirits of George’s wife, Clare, as she drove him to the protesters’ rendezvous.

“I’ll leave the car here, and take Liz in the carrier. We could walk over to the common. Take care of yourself, George! Love you!” Liz gurgled and smiled as her mum popped her into the carrier. George was hesitating, fiddling with the laces of his boots. Clare put her arm around him. “I’m ever so proud of you, standing up for what you believe in.” She kissed him gently on the lips. He smiled and stood up straight.

“I’d best be off then. Don’t want to be left behind! See you here at midday.” He set off to cover the quarter mile to where the protesters were assembling.

“Make sure the bastards see it.”

Edwin turned to the other protesters. There were thirty or so, a mixed bunch, from the smart to the squalid, from the dainty girl with flowers on her wellies to the gnarled man in filthy cords and battered army boots. Edwin himself looked like a paramilitary in a dark-green sweater, camouflage trousers and a balaclava. He carried a camcorder on a lanyard round his neck.

“Listen up, everybody. Hold those placards high. We want the Bentham to see them. I’ll try and get them in shot as I video. And remember – no violence! This is a peaceful protest. If you’re assaulted, move away.” He looked round the group. “Right. Let’s go.”

They followed him along the road, turned right, and entered the village of Bentham Manor.

The riders were assembling outside The Queen’s Arms.

“Uh-oh. Looks like we’ve got company,” Arthur muttered to Jack.

“Do you want me to see them off?” Brian looked eager, combative.

His magnificent grey walked forward towards the oncoming protesters, and stopped several yards short of them. They halted.

“Can you all hear me?” Jack had a loud and carrying voice. A few of the protesters nodded.

“I’m the MFH for the Bentham Hunt. Speaking on their behalf, I tell you that we have seen and noted your protest. If you wish to assemble on the verge there,” he pointed at the roadside, “we will be riding past in ten minutes, and we will have plenty of chance to admire your artwork.

Please don’t come any closer to the Hunt. Horses are strong and heavy, and are sometimes capricious. I don’t want an accident and I’m sure you don’t either.” He tipped his riding cap to them. “Good day to you.”

He turned his horse very deliberately, giving the protesters plenty of time to observe the intimidating size of the beast, and walked slowly back to the Hunt.

“Nice touch with the cap, Master.” Brian was grinning.

The protesters stayed put, irresolute, looking to Edwin for a lead. He beckoned them close, and spoke softly.

“I want photos of all of them, and I want video footage showing the Hunt assembling. I need to be closer. I want us to split into two groups, half on that verge, and half on this, and then walk towards them. Stop when you’re about five metres away. Don’t go any closer than that, and don’t make any sudden movements. Don’t yell. That ponce in the pink is right about horses being dangerous.

Edwin walked along the crown of the road, the protesters straggling after him. Some of the riders turned their horses to face the group. Fiona held Prince on a tight rein, moving to the edge of the group. She kept his head turned away from them as much as possible, but he tugged and pulled, his eyes rolling. The scent of aggression was strong in his nostrils.

George was close to Edwin, on the same side of the road as Fiona. He kept a wary eye on Prince, as he raised his placard high.

“I thought I warned you to stay clear?” Jack’s anger was plain. “Here, put that thing away!”

“That’s illegal!” yelled Jack. “Stop recording – now!” He walked Shadow forwards, leaned out of the saddle, grabbed the camcorder’s lanyard and tugged hard. The lanyard bit into Edwin’s neck, half choking him. Edwin lashed out at Jack’s hand, to make him let go. He didn’t. Edwin took hold of the lanyard himself, and pulled hard. Off-balance, Jack toppled forward in the saddle, and released Edwin, who stumbled backwards into Prince, and fell to the floor.

Prince reared, lashing out with his hooves. Using all her skill, Fiona controlled him within seconds, but the damage was done.

Edwin lay on the ground, motionless.

Jack was out of the saddle immediately, kneeling beside the fallen man.

“There’s no mark of hooves and he’s breathing, thank goodness. We’d better call an ambulance. Arthur, would you? Brian, give me a hand getting him onto his side.” Quickly, they placed Edwin into the recovery position. His eyes started to flicker open.

“Fiona, back Prince a little, would you? Give us a bit more space.”

Fiona edged Prince back, away from the fallen man. Suddenly, she gasped and pointed. George was slumped against the granite gatepost.

He was still unconscious when the ambulance arrived. The paramedics assessed him rapidly, and called in the air ambulance to take him to the nearest specialist neurological unit. The police took statements.

That evening, the local superintendent of police called on Jack Greenwood. While he couldn’t give a categorical assurance, it was unlikely that any charges would be brought. Jack had warned the bystanders to keep back, and, although there’d been a scuffle, it hadn’t involved George. It seemed that Prince, as he reared, must have backed into George, knocking him into the gatepost. The whole thing was just an unfortunate accident.

George survived, but his injury was life-changing; he was permanently disabled.

Fiona cried herself to sleep that night, and many following nights.

Clare was too busy looking after George to allow herself the luxury of weeping. Liz grew up wondering why her Dad was in a wheelchair. His slurred speech and distorted face frightened her, and his drooling repelled her.

The Hunt continued to meet.