“What Pegman saw” is a weekly challenge based on Google Streetview. Using the location provided, you must write a piece of flash fiction of no more than 150 words. You can read the rules here. You can find today’s location on this page,  from where you can also get the Inlinkz code. This week’s prompt is The Grand Hotel, Mackinac Island, Michigan, USA. 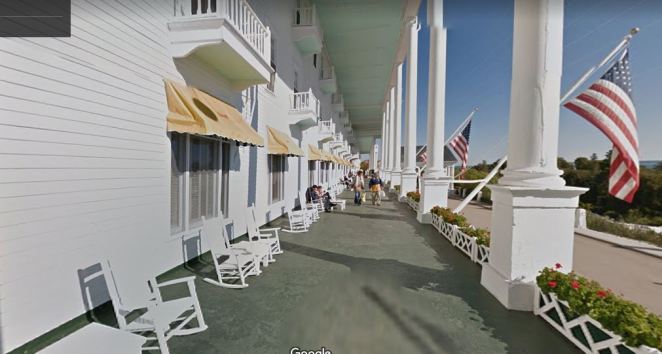 “We’ll hold the next Homeland Security meeting on Mackinac Island,” pronounced the President.

The VP shook his head but stayed silent.

“We’ll fly in. Airforce One will wow them!”

“Runway’s too short, Mr President. We’ll have to use a small plane. You’ll be escorted by F-35 Lightnings, though. They’re the best!”

The President rubbed his little hands together.

“And we drive to the hotel in The Beast.”

“No, sir. Cars haven’t been allowed on the island for a hundred years.”

“The Beast ain’t a car. It’s security. Make it happen.”

“And I’m to be met at the hotel by an honor guard.”

And so, two weeks later, the President arrived in The Beast at the Grand Hotel. He stared at the uniformed children lining the steps.

“It’s how things are done here, Mr President. The honor guard is always drawn from the scout troop.”