“What Pegman saw” is a weekly challenge based on Google Streetview. Using the 360 degree view of the location provided, you must write a piece of flash fiction of no more than 150 words. You can read the rules here. You can find today’s location, St Petersburg, Russia, on this page,  from where you can also get the Inlinkz code.

“So many tourists, and not an ounce of piety among them,” thought the babushka, as she pushed her way into the gorgeously decorated interior of the church. Sergei, the beggar, didn’t bother to call to her. He knew she would give him nothing; she was probably nearly as poor as he was.

“Please! My child is sick.”

Stella pressed a ten-dollar bill into Sergei’s hands, smiled at him, and entered the church.

“Which icon is Jesus?” she asked. The babushka sniffed at the woman’s ignorance.

Jesus gazed down compassionately on them, the old woman remembering hunger from the long-distant past and the young one hungry for culture and the future. He grinned as he looked at Sergei. He’d always loved a resourceful rogue!

For those who are interested in Jesus’ love for a resourceful rogue, the biblical reference is Luke 16 vv 1 – 13

Every week, Rochelle Wisoff-Fields (thank you, Rochelle!) hosts a flash fiction challenge, to write a complete story, based on a photoprompt, with a beginning, middle and end, in 100 words or less. Post it on your blog, and include the Photoprompt and Inlinkz (the blue frog) on your page. Link your story URL. Then the fun starts as you read other peoples’ stories and comment on them!

In the cool shadows, John could feel the holiness of the place. There was a special silence that was full of voices chanting. He took out a trowel from his backpack, and the silver teaspoon that his mum had bought him at the seaside because he had wanted it so much. There, amid the echo of centuries of prayer, he buried the spoon, and wished with all his might.

In her hospital bed, John’s mum peacefully abandoned her struggle against cancer.

Why did I visit Japan?

I expected to enjoy the food and the scenery; I anticipated seeing cutting-edge technology; I already knew from working with them that I liked Japanese people. The country seemed slightly exotic without being intimidating. A tour of Japan felt like a suitably ‘special’ holiday to mark my retirement, especially as we chose the cherry blossom tour which takes place around the time of our wedding anniversary.

Many Japanese celebrate cherry blossom season with a hanami party, which is a picnic under the cherry trees. On day two of the tour, our group was going to enjoy its very own hanami party! Unfortunately, the weather was poor, cold and wet, and we picnicked in the rain. Our tour guide had prepared copies of a traditional Japanese cherry blossom song for us to sing, and provided a recorded accompaniment. We sang it. It all felt a little silly.

Until the next day.

We took a boat trip on the Sumida River, and there, in the background, was the cherry blossom song, ‘Sakura, Sakura’, we had sung the day before. Suddenly, the symbolism of cherry blossom made perfect emotional sense. I don’t think I can explain it; it’s something you need to experience before you can even begin to understand it. It goes way beyond the obvious reading of the transience of beauty.

Then, a few days later, Mount Fuji. What is it about that peak that makes it so potent? I’m not Japanese; it’s not a national icon of mine; and yet seeing it evoked a sense of awe in me. And it wasn’t just my response. We were travelling by bus, and the whole busload of us  gasped (and I really mean that – you could hear the sharp intake of breath) as we first saw the mountain.

In the afternoon, I walked a short way along the ancient Tokkaido highway, which is planted on either side with 400-year-old cedars. There was one especially majestic tree. I stopped and rested my hand against its trunk. Abruptly I felt…disrespectful. I felt as though it would have been more appropriate to have bowed to the tree.

The next day we saw the Miyako Odori. I have rarely watched a performance of such intensity. I understand some of the theatrical devices that made it so powerful, but there’s more to it than that. Once again, it leads back to cherry blossom, the exquisite beauty of the world that humans are privileged to share for a short period.

This holiday has changed me. A small part of that change is that I feel more tranquil. I haven’t changed my religious belief; I’m certainly not a Shintoist, or an animist; but I’ve experienced emotional responses that go beyond my ability to understand or describe them more than superficially. I’m glad of those experiences; I’m the richer for them.

It was a good holiday. Thank you, Japan!

For a few short days

But the tree still lives.

We have seen many temples and shrines on this holiday. They are colourful and crowded. Many have been destroyed at some time and then rebuilt. They are often of great beauty. They celebrate important aspects of the natural world; for example, the temple that we visited today is called Kiyomizudera, which translates as “Pure water temple”. This particular temple has stood for 1200 years. It’s massive, it’s constructed of wood, and it is built entirely without using nails. The grounds were absolutely thronging with people.

This is the waterfall that gives the temple its name.

I have increasingly wondered during this visit about the extent to which Japanese people believe the teachings of these temples, and, so far as I can make out the answer is “A lot” and, simultaneously, “Not much at all”. In fact, I think it’s probably a meaningless question. 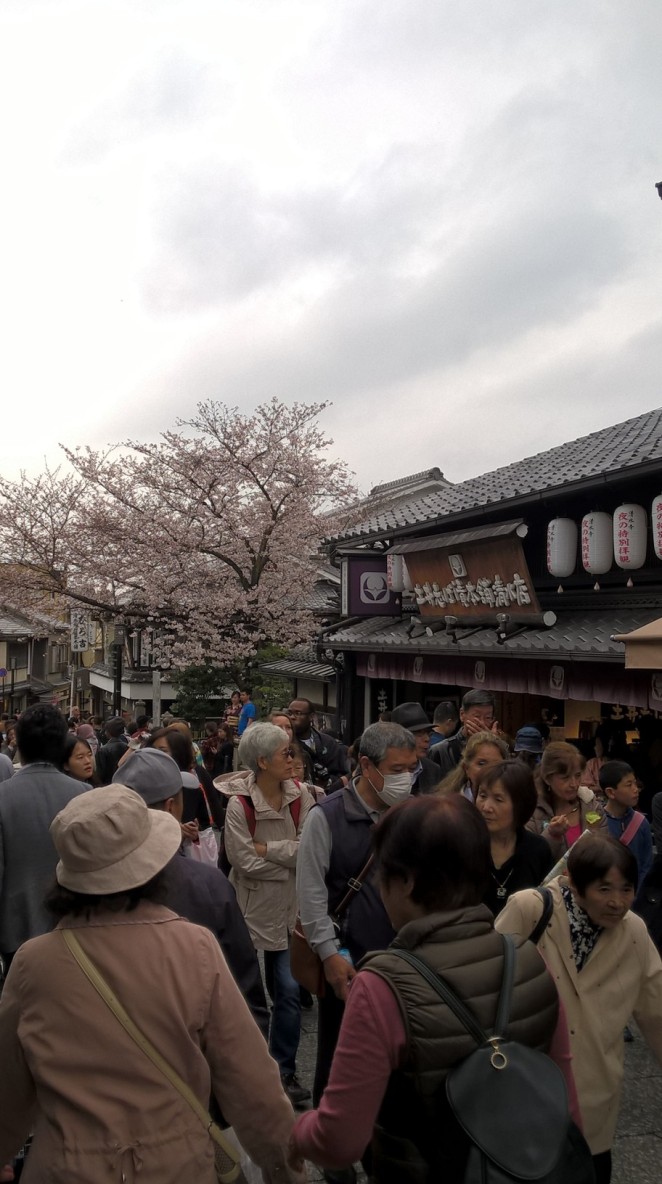 The throng of visitors close to the temple.

There is, apparently, a Japanese joke that says that each Japanese is born Shinto, and dies Buddhist, which seems to mean that when you are young you are seeking to influence the world around you, and when you are old you are more concerned with a tranquil acceptance of death.

Many significant life events are recognised in a religious sense, to a much greater extent than in the UK. For example, graduation, or the start of your first job might well be celebrated with some form of blessing. People go on pilgrimage and collect stamps from the holy sites that they visit – there are thirty-three such sites in western Japan, I’m told.

What comes across strongly is the extent to which symbolism is important. Children who have died young, or been stillborn, or been miscarried, are publicly remembered in wayside shrines. Houses often have symbols for protection or prosperity outside the front door.

And, of course, there is cherry blossom. Life is beautiful if brief – but there is continuity through our family. I have tried to capture a little of this with a haiku at the top of this blog post. 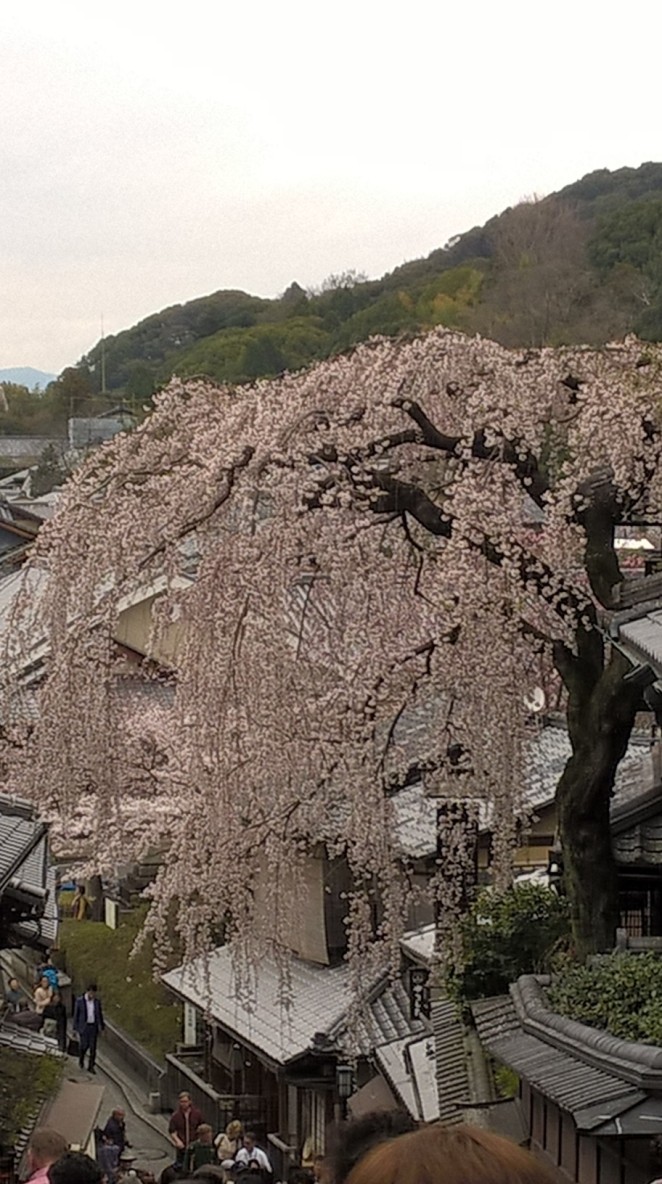 This post was written by Belle on her blog “Seeing everything else” on WordPress. It’s very much from a Christian perspective. However, it’s more generally applicable than that. It celebrates ’embers’ in the metaphorical as well as the literal sense, which is encouraging for those of us of mature years. I hope you enjoy it!

We had an impromptu bonfire the other night, enjoying the happy crackling of the blaze and the exhilarating, whooshing roar of a marshmallow turning into a torch. But although I enjoy eating s’mores, although I enjoy being loud and laughing about it, neither of those are the best parts of the fire. The most lovely part is just sitting, still in body and mind, watching the flames run and the heat ebb.

And perhaps the most beautiful flow of all its life is when it gets down to embers. The flames long-gone, the warmth and depth of wood-fire-smoke becoming a part of you, these embers still glow and dance long into the night. Ever-fluttering light, as if a thousand heartbeats were jumping inside, every now and again a single flame popping up and dashing lightly back into another hiding spot, as if a thousand tiny faeries of heat were dancing…