Tokyo has some pleasant parks, and the closest to our hotel is the Yoyogi park. We approached from the north, and came first of all to the Meiji Jingu shrine. This is a Shinto shrine, one of the most important in Tokyo. In the early twentieth century, Emperor Meiji created a garden in the shrine complex, which, according to the various information boards, was greatly enjoyed by the Empress Shohen. One of the boards solemnly told us that the Empress liked fishing, and often went fishing from this specially constructed fishing point. Somehow I just couldn’t visualize her cooking and eating her catch! Nowadays, anybody can walk in the gardens for 500 yen (it’s a standard admission fee presented as a donation for upkeep – fair enough, I think), so we paid up and followed the path to the iris garden. 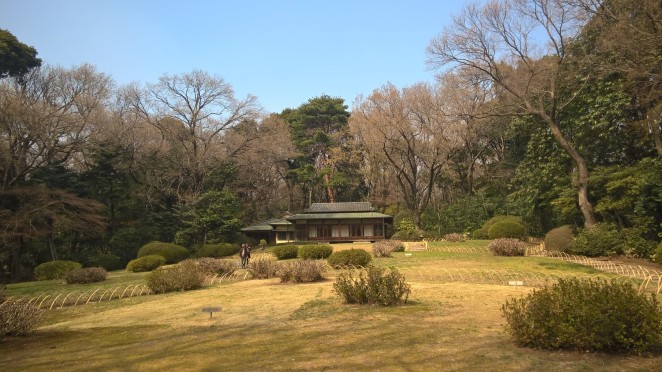 Of course, at this time of year, all you can see of the irises is the green shoots, but it was clear that in the flowering season (June) it would be a spectacular sight. Despite there being no flowering irises, we had the pleasure of the deciduous trees just barely coming into leaf, giving a mist of colour around the nearly bare branches. In any case, all excellent gardens are beautiful in every season and this was no exception.

The photo shows the torii at the entrance to the Meiji Jingu shrine.

At the Meiji Jingu shrine itself there was a place for people to write their prayers and place them with a donation in an envelope to be presented in the shrine. You could buy all sorts of pre-printed messages, like “I pray to come back to Japan.” It would be easy to make fun of the practice, but as we passed a middle-aged woman got up from where she had been kneeling. Her face was quietly desperate, with an expression of desolation mingled with a forlorn hope. Real people pray here, with real needs. I hope she found comfort.

We spent so long enjoying the tranquil gardens that we never made it to the Yoyogi park itself. Never mind – there’s always tomorrow!