“What Pegman saw” is a weekly challenge based on Google Streetview. Using the location provided, you must write a piece of flash fiction of no more than 150 words. You can read the rules here. You can find today’s location on this page,  from where you can also get the Inlinkz code. This week’s prompt is Athens, Greece. 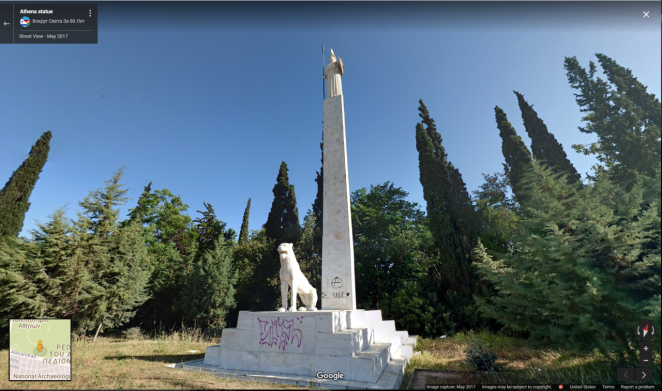 The night’s blackness is beaten back by the soldiers’ arc lights.

Stinking exhaust from a tank blows across the road towards us as we cling to the gates of the Polytechnic. Somebody has a radio. My Giorgios is still broadcasting from the heart of our struggle.

“Polytechnic here! People of Greece, the Polytechnic is the flag bearer of our struggle and your struggle, our common struggle against the dictatorship and for democracy!”

Giorgios, I love you!

It creeps across the road. Surely it’s not going to crash the gates? There are a dozen of us hanging on to them!

Alex, next to me, yells at the soldiers massing behind the tank.

“Brothers in arms! Disobey your orders! Support us in the struggle for liberty!

‘From the Greeks of old whose dying

brought to life and spirit free…’”

The tank is coming.

From 1967 – 1974 Greece was ruled by a military junta. They used all the techniques of a totalitarian state including arbitrary arrest and torture. Students were at the forefront of the resistance, and in November 1973 they occupied Athens Polytechnic, and improvised a radio station using laboratory equipment.

On the night of 17 November 1973 the army stormed the Polytechnic, using a tank to break down the gates, to which students were clinging. No lives were lost during the assault – although there were many injuries. However, later in the day soldiers shot dead several people outside the campus, including 17-year-old Diomidis Komninos shot through the heart by a sniper.

I have quoted a translation of part of the Greek national anthem, which students were singing as the tank attacked.

I shall always recognize you

by the dreadful sword you hold,

as the Earth with searching vision

you survey with spirit bold.

From the Greeks of old whose dying

brought to life and spirit free,

let us hail you, oh Liberty

15 thoughts on “What Pegman Saw – “Life and Spirit Free””